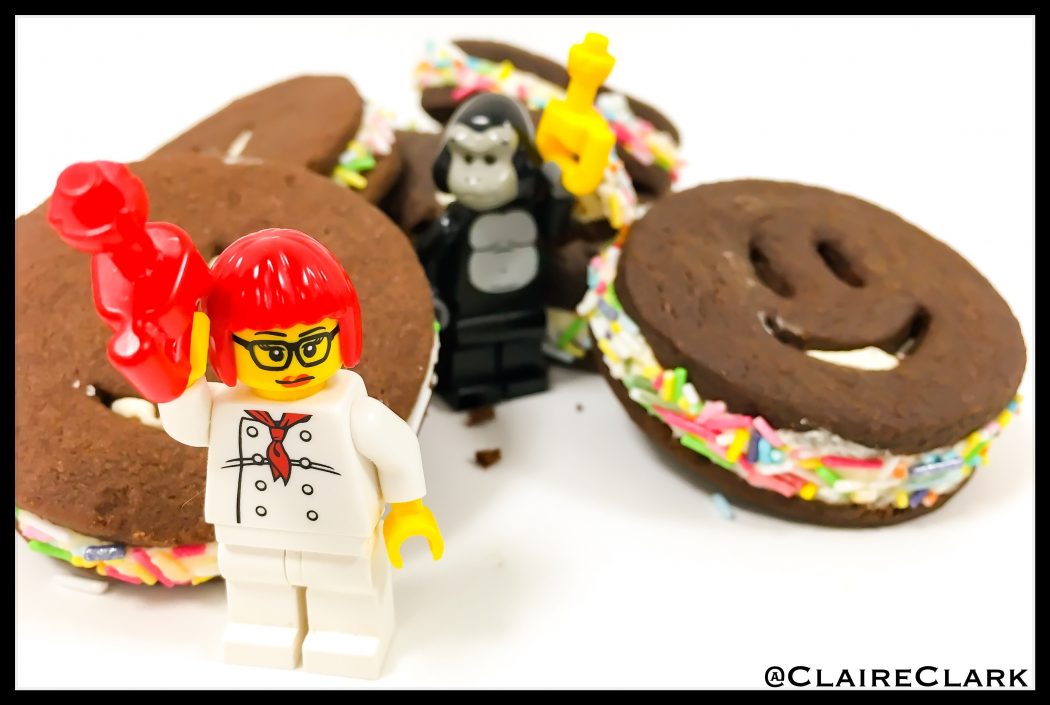 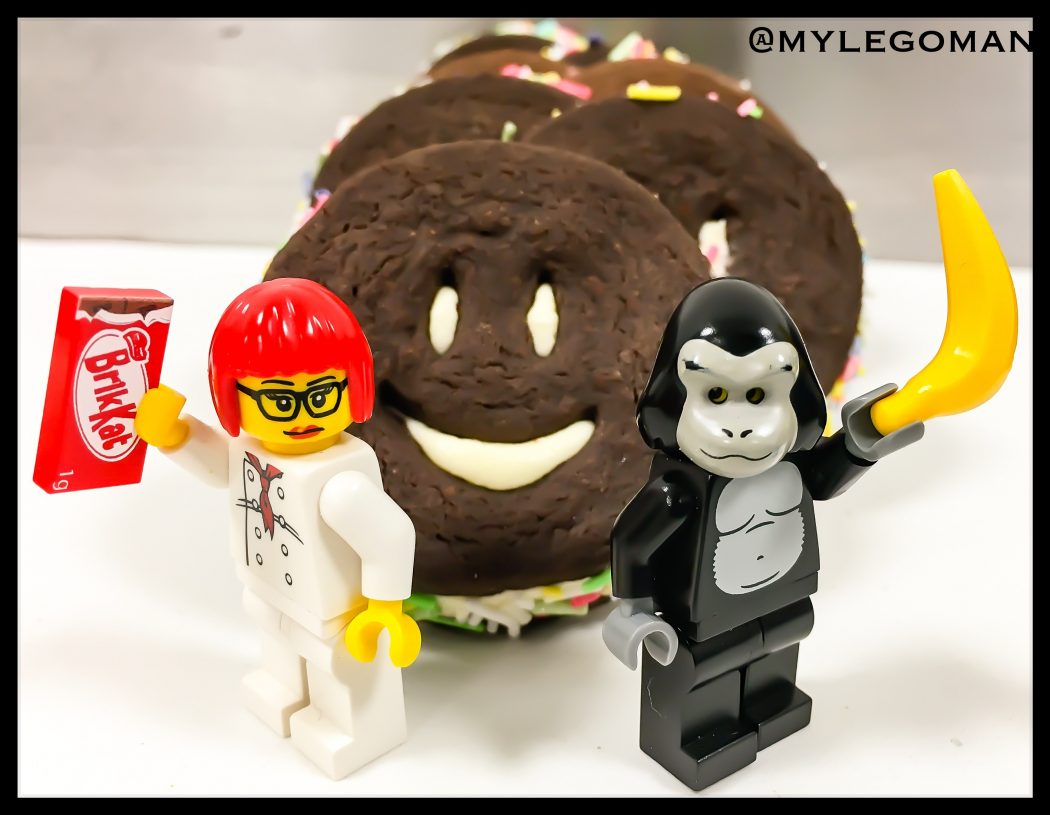 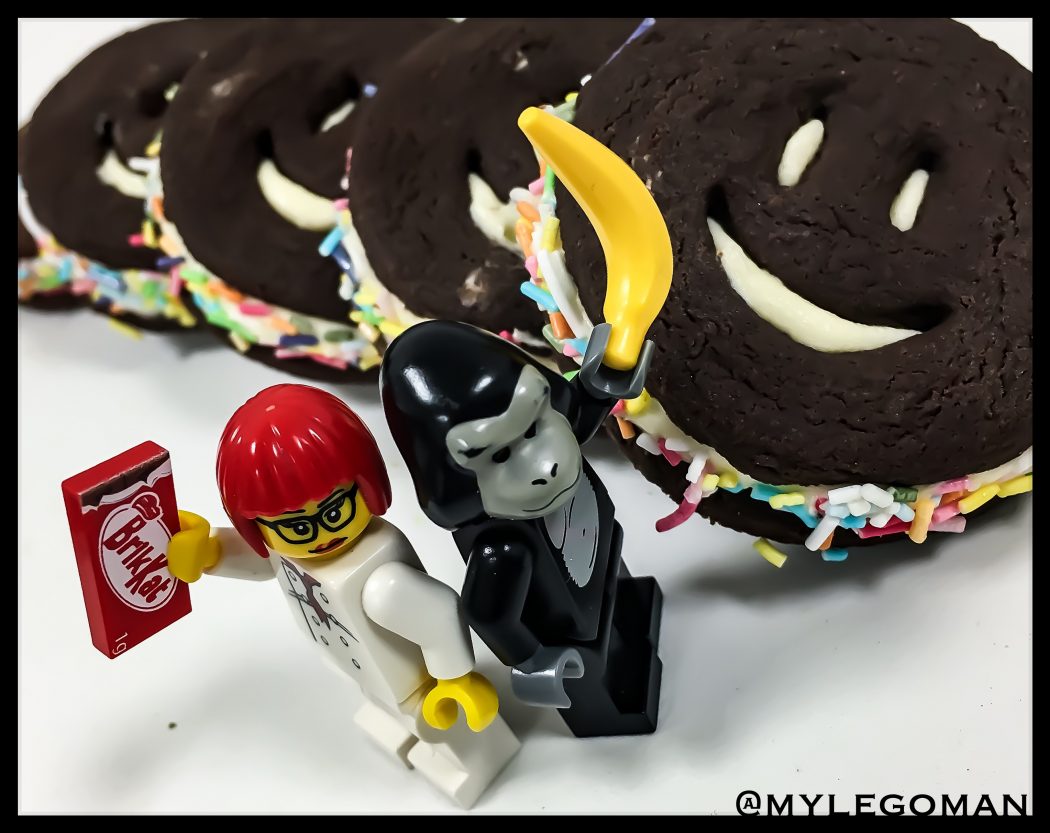 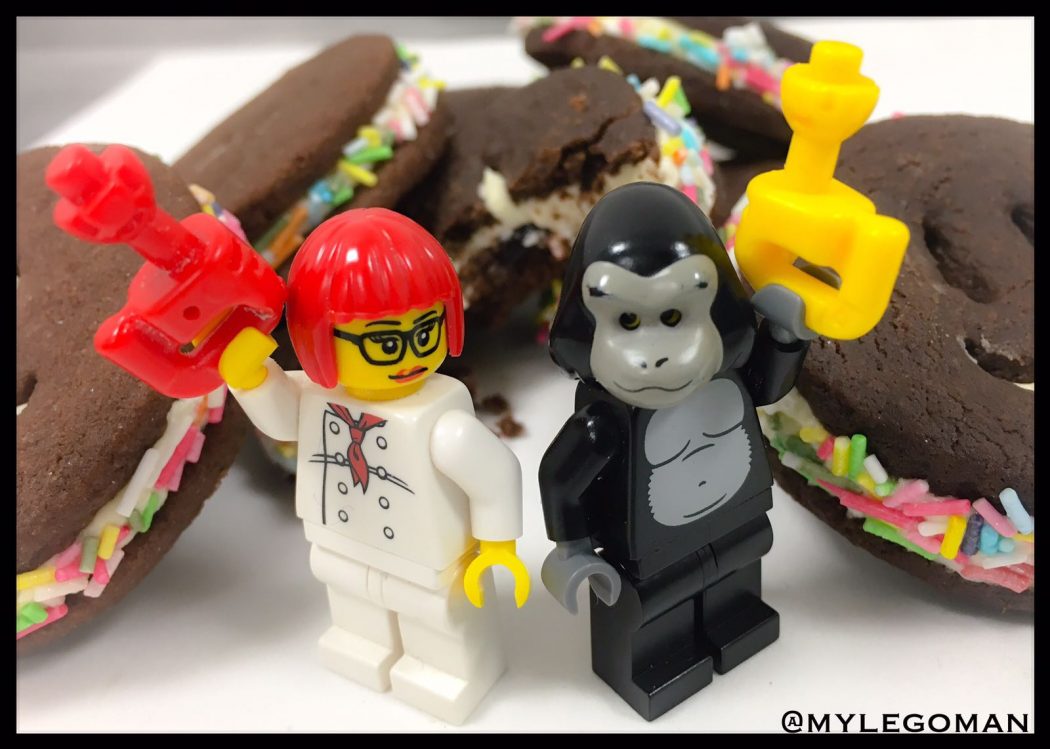 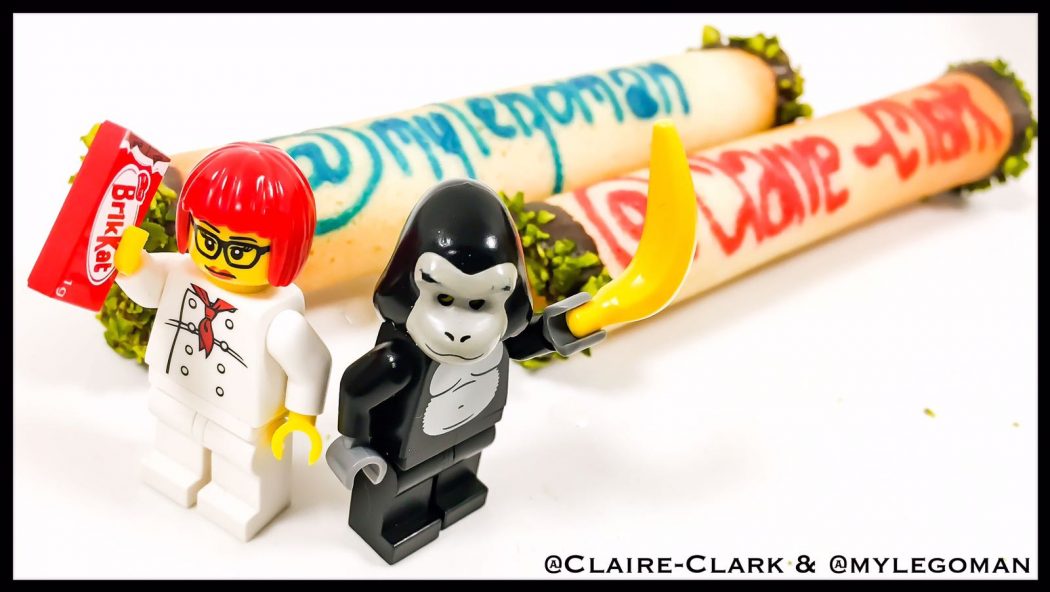 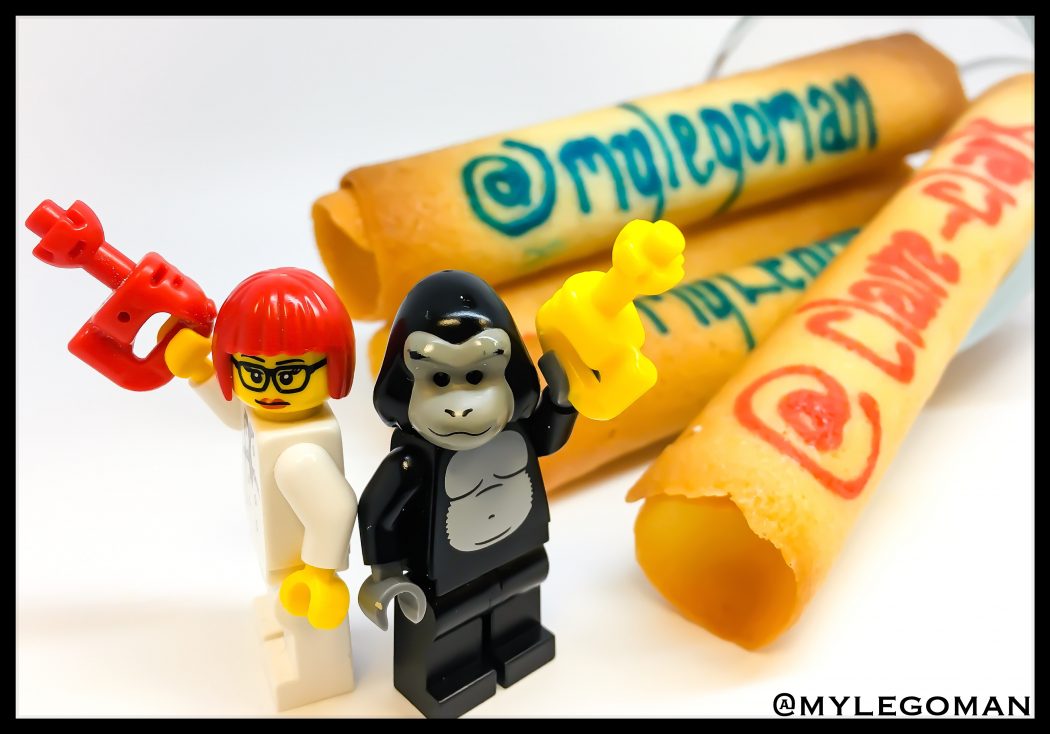 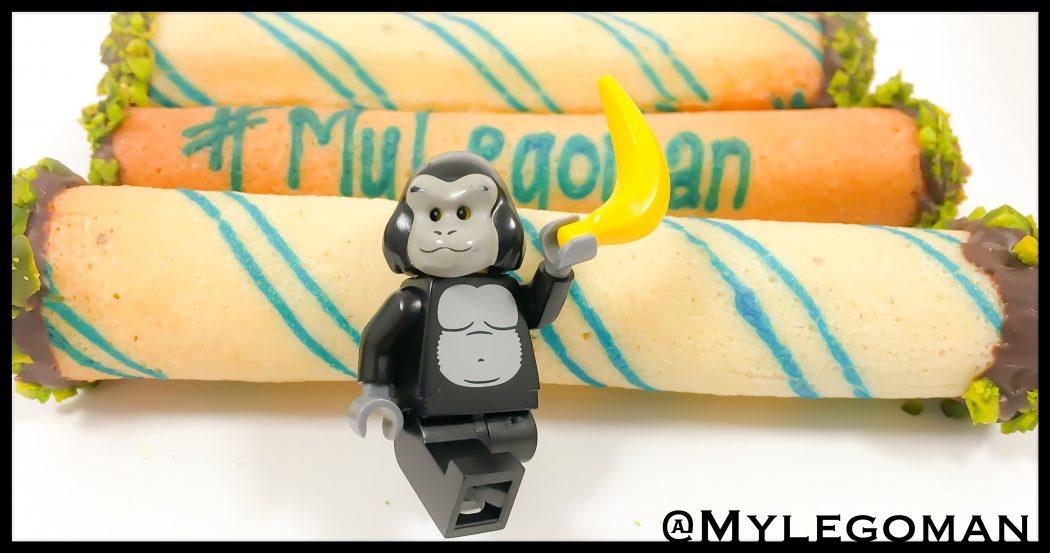 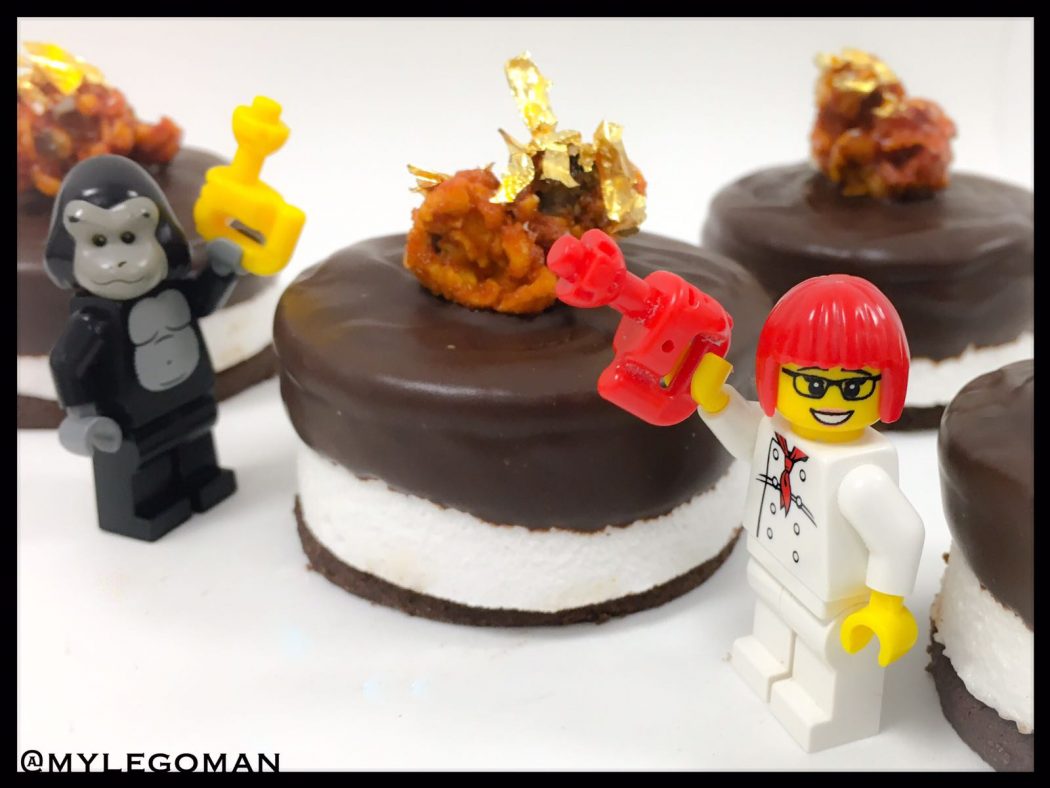 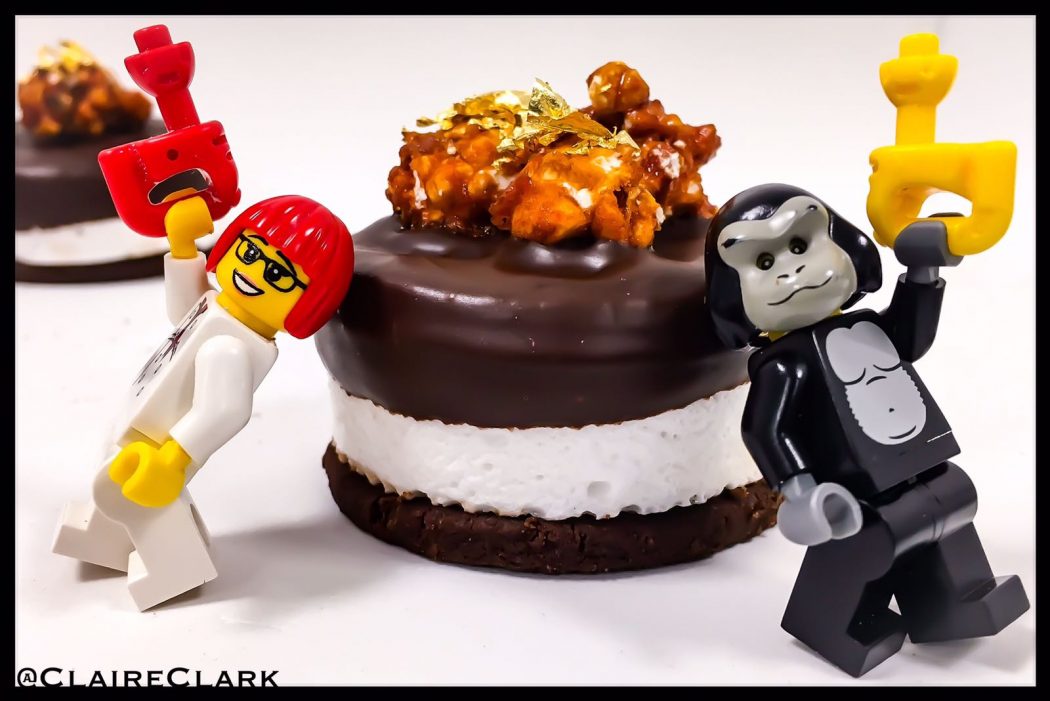 The challenge began and I was taken under the critically acclaimed wing of International Pastry Chef Claire Clark (@Claire_Clark). Simply stepping foot in the pro kitchen down at Pretty Sweet (@PrettySweetLon) was a huge first for me – I barely got past the buttons of my chef whites and retreated to the corner of the room, complete with a rabbit in  headlights facial expression!

PrettySweet is a bespoke patisserie company lead by the unbelievable expertise of Claire Clark and Sarah Crouchman at the creative helm. The mouthwatering treats leaving this kitchen are quite frankly, awesome! This Summer, Pretty Sweet showcased their masterclass for a jaw droppingly delicious Elderflower Mousse with Strawberries in the industry leading Caterer magazine.

It was time for mylegoman to leave the corner of the kitchen, roll up the chef whites and RISE to the challenge. Would my dodgy A’level results match Clark Clark’s MBE I wonder?

The #biscuitbanter was rolling and it was time to master one of my all time favourites- the Jammie Dodger! Well actually, Pretty Sweet’s scrummy version, the Smiley Dodger! Let me assure you, these fab creations are not to be eaten in polite company-  you simply must take them apart and enjoy each layer of edible perfection… The delicious jam, the cream, the sprinkles and the exquisite biscuit.

Dragged once more from the kitchen corner – I was given a swift pep talk from Claire. The baking wasn’t over yet- there was more to be made! Next bake, the Cigar Tuiles! Time to get rid of the vacant look on my face and get making a Tuile template under Claire’s watchful eye. I followed my set of instructions- just! Obviously, I had to be rescued when it was time to remove the hot bakes from the oven and delicately wrap them around a wooden spoon- oh and don’t get me started on the precision piping! Despite needing supervision through practically the entire process, they were the most divine marketing ‘tool’ Tuile I had ever eaten! Now, I understood why taste is King in Claire’s world!

As if those weren’t tricky enough… it was #NationalSmoresDay. I’d never even heard of a S’more – perhaps due to my lack of camping experience?! Claire however, pulled out her precious, battered, worn, encased in cling-film, little black book of recipes that she had gathered from her time at the French Laundry, Yountville, California- this 3 Michelin Star Restaurant is one of the most prestigious venues on the planet!

A S’more is crudely described as fire-roasted marshmallow, with a layer of chocolate sandwiched between two graham crackers. However, after getting to know Claire’s style, this was not going to be a S’More out of the ordinary! She was taking this simple concept to a whole new level of deliciousness!

As much as I would like to say that we created the S’Mores together- I cannot tell a lie! Claire finally allowed me to relax in the corner of the kitchen to watch the Master at work baking my new favourite biscuit!

And so the day came to a close. A successful day of baking with Claire Clark MBE MOGB and Crème de la Crème Judge. Biscuit Week challenge was complete and my accomplishments featured in the #GBBOTwitterBakeAlong Hall Of Fame… but where to for my next baking challenge?!